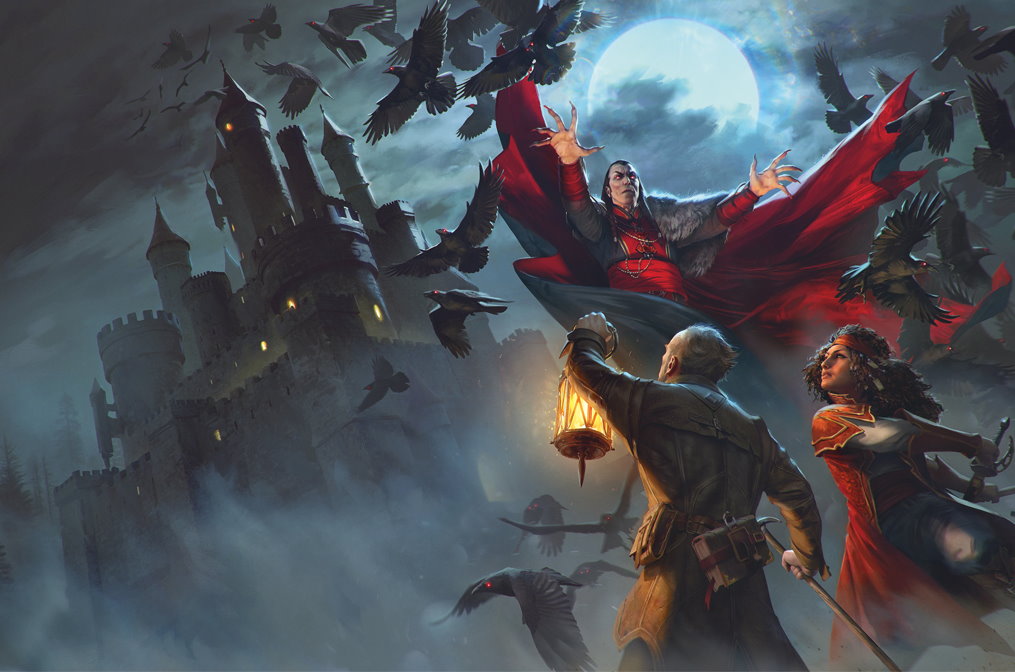 The upcoming Dungeons & Dragons book is a little something new for Fifth Edition. It’s a setting book featuring dozens of locations, monsters, player options and an adventure. It’s a genre guide built to help Dungeon Masters add horror to their games. But, most importantly of all? It’s a return to Ravenloft.

The book will expand on the ever popular world explored in Curse of Strahd, which saw players find the Count amid the mists of Barovia, in Ravenloft. However, this is not the only Domain of Dread that makes up Ravenloft, and each contains its own dark lords and horror styles, which this book will allow you to explore, including new adventures, monsters, lineages, and subclasses.

The classic domain of Barovia, for example, is just one example of a domain steeped in gothic horror, while dark fantasy and psychological horror underpin a domain like Dementlieu.” Dementlieu is one of over 30 domains of dread detailed in the book. It’s a sharp contrast to Barovia’s dark forest and looming Gothic castle on a hill. Instead it’s covered in a glamorous sheen of fine clothes and fancy parties. Everyone is dying to be invited to the Grand Masquerade held by Duchess Saidra d’Honaire every week on her private island. And, in many cases, killed if they are discovered at the ball if they’re not supposed to be there.

“The whole domain plays up elements of deception, psychological manipulation, and creepy fairy tales, all in a setting where the land itself changes in malicious and impossible ways,” said Schneider. It’s a domain that leaves everyone paranoid and posturing to blend in with the crowd while being terrified that they’ll be exposed for not being in on the collective lie. Oh, and there’s murderous phantoms.”

“Aside from the nostalgia of Ravenloft as a classic D&D setting, horror and D&D are a natural fit. It’s fun to play a character dealing with terrifying situations. It’s fun to play terrifying situations dealing with characters. Ravenloft provides endless opportunities to choose your role as player or DM—the heroes or the terror—and explore whatever horror experiences you and your friends enjoy.”

Van Richten’s Guide to Ravenloft is the rare return for Fifth Edition to a setting that it’s already touched. Beyond more monsters and mechanics, the book looks to update many of the classic realms of horror to expand the themes available to Dungeon Masters as well as tackle problematic elements domains from previous editions.

In addition, you’ll be able to create more terrifying characters with Dark Gifts, which offer benefits, but at a deep cost. You’ll have the opportunity to play as a dhampir created by a vampire, a hexblood descended from a hag, or a reborn brought back from the dead, allowing you to play around with features of monsters that were previously unplayable in core D&D. Plus, there’s additional subclasses, with the College of Spirits for the bards, and the Undead pact for warlocks.

Van Richten’s Guide to Ravenloft wil be available on May 18th in both a regular and limited edition cover only available at local game stores. Also available for pre-orders via

THE FIRST LESSON: INTRODUCTION TO STRIXHAVEN

Check out Scale75 Range of paints now available in

Some of the latest titles that just arrived in sto

Join us for a fiesta! Learn to play the world's gr

Some modifications and it becomes a Wookie strongh

Anyone fancy vacationing here in the Pacific Islan

Experimenting with the Pacific terrain... specific

The German defence failed at round 5. The win at

How to use Vallejo Liquid Mask

What are Instant Colors?