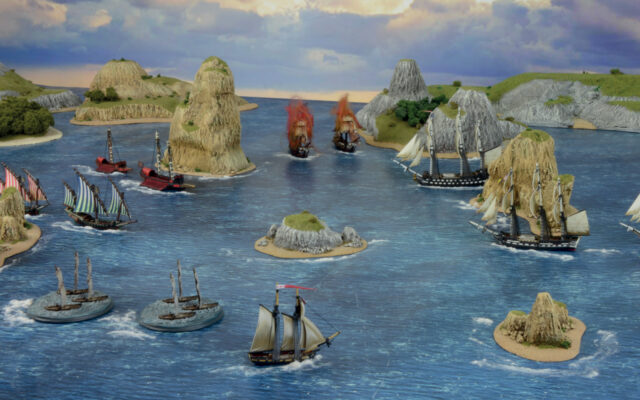 by Dan Hewitson via Warlord Games

Black Seas focuses on the golden age of sail, which encompasses the period between 1770 and 1830. During this period the navies of Europe and beyond fight for dominance of the high seas. Hold Fast! is a new supplement for the Black Seas age of sail game. Inside, find new ways to play, such as charting your course as an independent smuggler or following a navy career from lieutenant to admiral.

New Scenarios: Fight in 16 new scenarios that range between cat-and-mouse chases, shallow river battles, passenger escorts, and mutinies. All culminating in the explosive Battle of the Nile which saw the spectacular demise of the French Flagship, L’Orient.

New Navies & Ships: Launch new famous ships, such as HMS Agamemnon, Santa Ana, or USS Niagara. Commission new captains of renown for the British, French, Spanish and US navies, such as Louis-Antoine-Cyprien Infernet or John Paul Jones. Or set sail with entirely new fleets from the Russian, Swedish, Dutch, Portuguese, or Ottoman Empire navies. Alternatively, become the scourge of the Mediterranean at the head of a Barbary Coast pirate fleet.

Solo Play Rules: Finally, alongside all the new additional advanced rules and ship statistics, enjoy three solo scenarios or introduce the nightmare terrors of the deep that are born from sailors’ superstitions.

When the continuous thunder of enemy cannon fire and splintering shards of flying wood are erupting all around you, remember: do your duty and hold fast!

Additionally, new vessels will be launching to the waters of Black Seas alongside Hold Fast!

2nd Rate Ship of the Line

Within the Royal Navy system of rating the ships of a fleet were designated based on the number of guns they carried. A 2nd rate ship-of-the-line was something of a hybrid; carrying between 90 and 98 guns, sitting in between the larger statures of 1st rates and the smaller but far-more popular 3rd-rates, there were relatively few 2nd rates built during the Carronade era.

Three-decker 2nd-rates were primarily used by the British. Their height relative to their length lent them a reputation as handling poorly. They were, however, able to withstand great punishment, and could often be mistaken as 1st rates at a distance, giving enemy commanders much pause for thought where engaging was concerned.

A 3rd rate ship, as defined by the British rating system, was a ship of the line which mounted between 64-80 guns. Usually, this would mean two gun decks. Despite their relative size and power compared to larger 1st and 2nd rates, it was considered that 3rd rates maintained an effective, perhaps even superior balance between sailing ability, firepower and cost.

For a number of nations, 3rd rates were the most popular ship size. Cheaper to operate and easier to sail without the sacrifice of offensive capability, the only ships a 3rd rate could not single-handedly engage were larger three-decked ships. A large number of 3rd rates were built and employed on a variety of missions.

In Black Seas, a small 3rd Rate is classified as a large ship of 64 ship points. It lacks the broadside carronade and stern light cannon of its larger brethren, but can easily outpace the larger 1st and 2nd rates.

Though Black Seas is primarily concerned with the Carronade era, Hold Fast! introduces guidance for playing games set during a ‘simpler time’. You’ll thus find their rules for inclusion in games as large ships. The ship profile of a galleon varies dependent on the era in which the game you are playing is set.