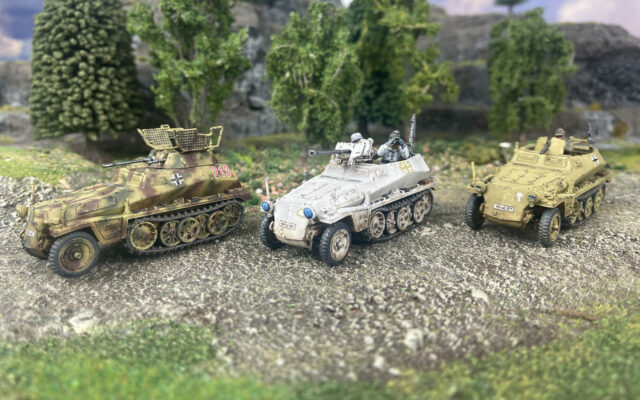 Coming up for pre-order this weekend is the highly anticipated Sd.Kfz 250 (Alte) Half-track, joining the Warlord ranks as our latest Bolt Action plastic vehicle kit. Build three variants right out of the box. If that wasn’t enough on its own, we’re also introducing three speciality Opel Trucks.

The Sd.Kfz 250/1 was a reconnaissance and transport half-track mainly used by scout and HQ units. The vehicle was a shortened version of the ubiquitous Sd.Kfz 251 Hanomag series and much like its longer cousin there were many variants fulfilling different roles, such as cable carriers, ammunition carriers and radio carriers, amongst others. It carried six men including the driver and the co-driver and was armed with two pintle-mounted MG34 machine guns, one shielded forward facing and the other covering the rear and air.

This model is based on the original ‘Alt’ (old) version which served through World War II with the forces of Germany in all theatres as well as with their Romanian allies.

As well as the standard Sd.Kfz 250/1 version (shown above), the new kit contains enough parts to make the following variants, should you so choose:

Enclosed version of the 250 series half-track armoured personnel carrier, with a 20mm cannon in the turret, it was used as a half-tracked scout vehicle to replace the wheeled SdKfz 222. Full production began in 1943.

The Sd.Kfz saw service throughout the war in many different theatres – and the kit has you covered with the inclusion of crew figures, with separate head options for both regular and winter uniforms.

This is the first of three Sd.Kfz 250 (Alte) plastic kits in a similar vein. More variants will be hitting tabletops soon, the box-arts of each we have previously revealed, but have included again below. Keep your eyes peeled on the Warlord Newsletter for news about these releases!

The wheeled Opel Blitz and the half-tracked Maultier version were amongst the most iconic and versatile German wartime vehicles. The truck fulfilled a number of roles with several variants. Whether your army is launching the Blitzkrieg into Poland, France and the Soviet Union, suffering the choking heat and dust of the Western Desert or taking on the Allied assault on Europe and the push into Germany these Opels are terrific additions to your Bolt Action army.

Each has assembly options. The Fuel Bowser can be left open to reveal internal detail, the radio truck has extended/retracted aerial options, and the ambulance can be assembled with or without the rear entry steps.

These are not only suitable for inclusion within armies but could easily form the basis for exciting scenario-based gameplay. Assault a German convoy with partisans or hold a fighting retreat as you desperately seek to escape with crucial supplies for just two examples. Alternatively, they are superb within themselves to embellish a tabletop as tabletop scenery.

A Visit to Fort Siloso, Singapore

7 Wonders Duel – What a Wonder!