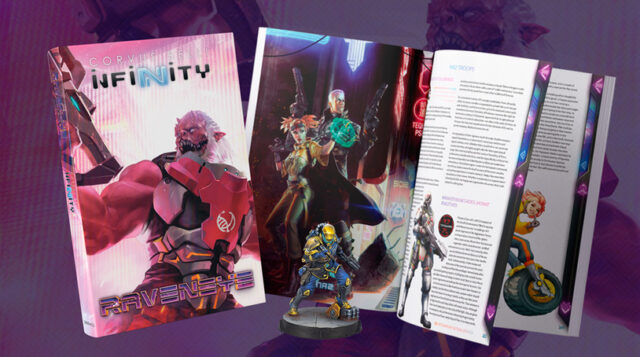 180 years into the future, the Human Sphere faces a new challenge from the alien threat of the Evolved Intelligence and its Combined Army with the assault on the Raveneye Orbital Complex that has opened the way to the Morat Aggression Forces’ deployment in the Durgama region and has furthered the Combined Army’s conquests on Concilium Prima, the political heart of the Human Sphere.

Raveneye presents a breakthrough and change in the history of the Infinity Universe that will be continued in narrative campaigns, special missions and also in ITS.  This book also includes a set of 3 narrative missions that allow you to recreate this event at the gaming table.

The assault on the Raveneye Orbital Complex, a defensive military compound disguised as a communications relay station, has been the key to opening the way for the Morat Aggression Forces’ deployment in the Durgama region, and has furthered the Combined Army’s conquests on Concilium Prima, the political heart of the Human Sphere. What could possibly be so important to the almighty leader of the Combined Army? Or could it be just another smokescreen to divert the attention of the Concilium Coordinated Command?

Raveneye offers a more in-depth look at the background of Military Orders (PanO), Ariadna (Dawn planet and Kosmoflot), Corregidor (Nomads), the Morat (E. Combined) and NA2 (mercenaries), as well as new troops for these armies, with special emphasis on Morat.

With this book we will learn about the fall of the monastery-fortress of Strelsau, the second death of Joan of Arc, the re-foundation of the Teutonic Order, the sacrifice of Corregidor’s Satellite Module and his oath to Never Forget, the new territories of Ariadna both on the planet and in space, and how Morat history and society is determined by their violent, warlike and slave-like character making them the most feared race in the galaxy.

It also includes three narrative scenarios recreating the assault on this orbital station that can be played in campaign mode or independently. Plus 4 painting tutorials for Military Order Cruisers, Corregidor Intruders, Kosmoflot Para-Commandos and Morat Vanguard Infantry.

Connect now and lead your elite force into the most dangerous war zones of the Human Sphere!

The brutal and resolute Morat Aggression Forces never withdraw and are capable of completely razing a battle field rather than losing it. Considered a plague by the rest of the universe, the Morat are the militaristic race par excellence. These aggressive and violent aliens have become the main shock force of the Combined Army, above all other species in service of the Evolved Intelligence.

This box includes 9 models, which are all of them new designs and new sculpts for the Morat army: