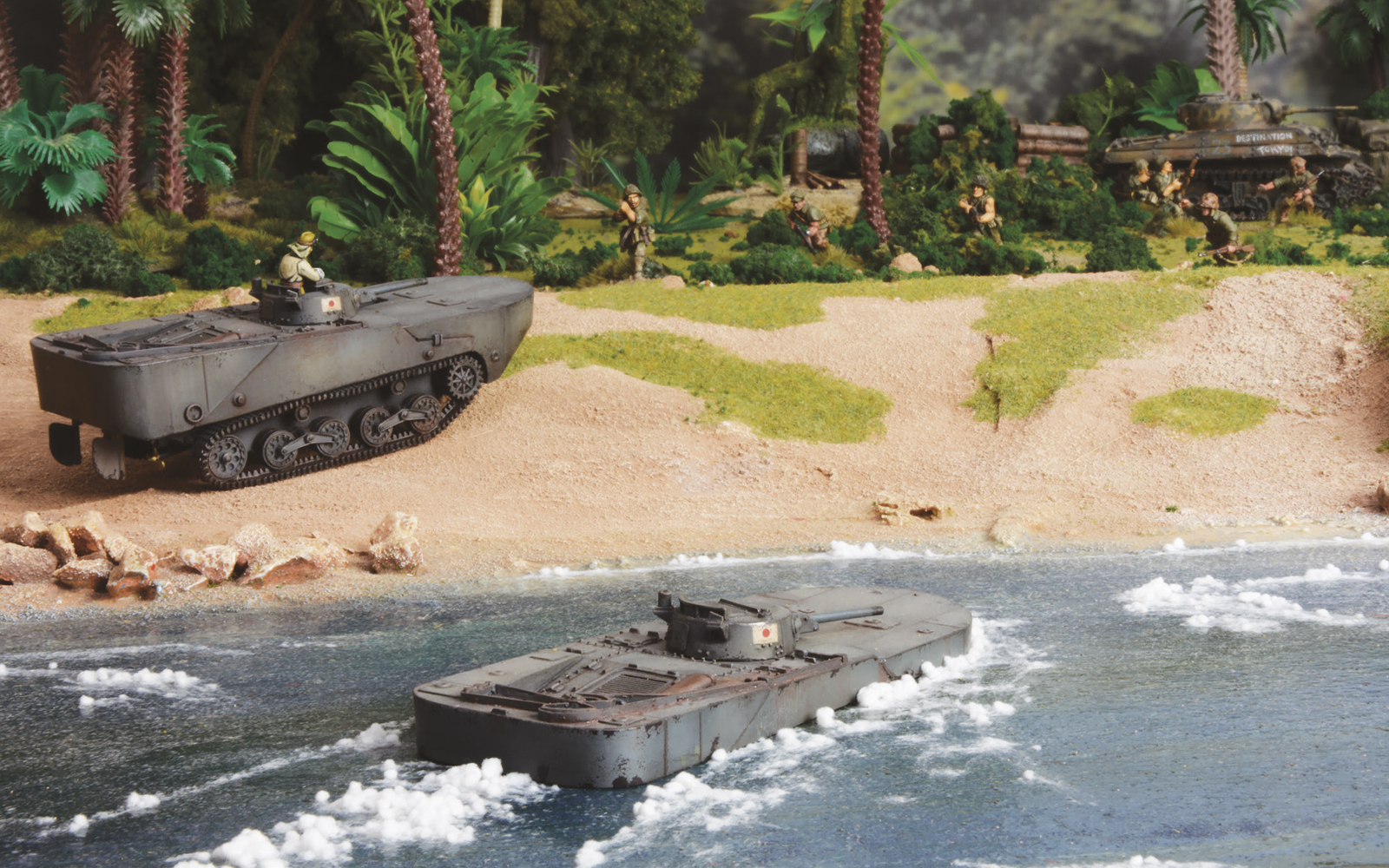 The Mariana and Palau Islands campaign supplement for Bolt Action allows players to recreate the historic island-hopping battles between US and Imperial Japanese forces in the Pacific theatre that took place in 1944. Even whilst the Allies stormed the beaches of Normandy, US forces were beginning to sweep across the Pacific in their own Blitzkrieg, fighting embittered and ferocious battles across tiny strips of land against tenacious Japanese defenders.

The battles described are concerned with the campaigns of the Mariana and Palau Islands specifically and a number of battles are described in great detail, including those of Saipan, Guam, Peleliu and Anguar. The fighting during these campaigns was controversial and bloody, rivalling the battle of Stalingrad for sheer inhumanity in some instances. Though there were many other battles within these campaigns, their number makes them impossible to describe them all in full within a single volume. The book gives players enough tools to recreate any other battles themselves, should they wish.

A wealth of scenarios are included to represent some of the most important battles and are presented in such a way to form an extended campaign. You’ll find new units for the Japanese and United States (both the US Army and Marines), and all the special rules you need to play; including, crucially, those for amphibious assaults, dug in defenders and tropical hazards amongst many others.

The Island hopping campaigns of the Mariana and Palau islands were quite unlike the land war that raged across Europe, with most battles fought over relatively small islands, many of which homed densely packed jungles. There was no scope for high manoeuvrability and each of these islands needed to be individually fought for, and the defenders expelled. The result of this means that many of the battles of the campaigns shared many characteristics – from the initial beach landing to a cyclical to-and-fro of Japanese counterattacks and US advances until eventually the most fortified strong points would be assaulted and the defenders expelled.

To enable Bolt Action players to achieve a similar effect on the tabletop, a series of base scenarios are presented in the first section of this book:

Operation Forager was intended to neutralise Japanese bases in the central Pacific whilst simultaneously supporting Allied efforts to retake the Philipines and provide air bases for strategic bombing campaigns against mainland Japan. This two-pronged attack was the result of two different tactics being employed, one favoured by MacArthur, and the other by the head of the US Navy, Admiral Ernest J. King. Neither was happy with the resources they received to accomplish their goals. However, the result was a stretching of already fraught Japanese resources. Following the success of the earlier Marshall Islands campaigns, US forces developed an Island Hopping Strategy, leapfrogging across the Pacific, landing and seizing control of comparatively lightly defended locations, whilst leaving the more strongly fortified Japanese-held islands isolated in their wake with dwindling resources.

The Mariana Islands were a significant part of this undertaking, with three main islands, Guam, Saipan and Tinian. These locations were key to Japanese defensive strategy – with the Japanese Central Pacific Fleet and 31st Army based there.

The most significant battles in this campaign are detailed in full, and split into subsections by specific island. Relevant theatre selectors are presented for each. You’ll also find a series of scenarios which may be played as a campaign if players choose. The scenarios featured entail:

Later in the campaign, it was decided that the Palau Islands also needed to be neutralised. This island group numbers around nearly 100 distinct landmasses; with the threat of Japanese aircraft launching from Peleliu in the island group, they were deemed too great a threat to ignore. Their strategic importance stemmed from being nearly equidistant between New Guinea, the Mariana Islands and Mindanao. They would even be able to employ the captured airfield to protect MacArthurs right flank. A new operation was devised, codenamed Stalemate, which would have been a larger endeavour than the invasions of Guam or Saipan – however, this operation was cancelled due to delays caused by the Guam invasion. As such, a second operation was drafted, Stalemate II, whose primary focus was the island of Peleliu. Japanese Intelligence had expected America’s attack to come to the Palau Islands before the Mariana Islands, as it was, the defenders, some 10,500 strong, had an additional three months preparation.

Scenarios for the Palau Campaign include:

A handful of new units for use in your games of Bolt Action are included for both US and Japanese forces. For the Japanese, these include the IJA Engineer squad, Night Infiltrators, lone snipers and improvised anti-tank teams.

The US benefits from some alternative unit compositions as relating to the campaign, incorporating flamethrowers into US Marine squads rather than acting as separate teams, for example. You’ll also find a few new vehicles and rules for Pacific tank upgrades, as well as the ability to add rifle grenades to your squads.

You’ll also find all the relevant special rules you need for the scenarios in this book conveniently located in a single section. Many of these are concerned with the business of island hopping warfare, so you’ll find everything you need for amphibious assaults, as well as fortifications, dug in defenders, minefields and barbed wire. There are also sections detailing the hazards of the tropical climate and a section on Japanese infiltrators – who used firecrackers to unnerve nervous or inexperienced US troops into firing and giving away their positions.