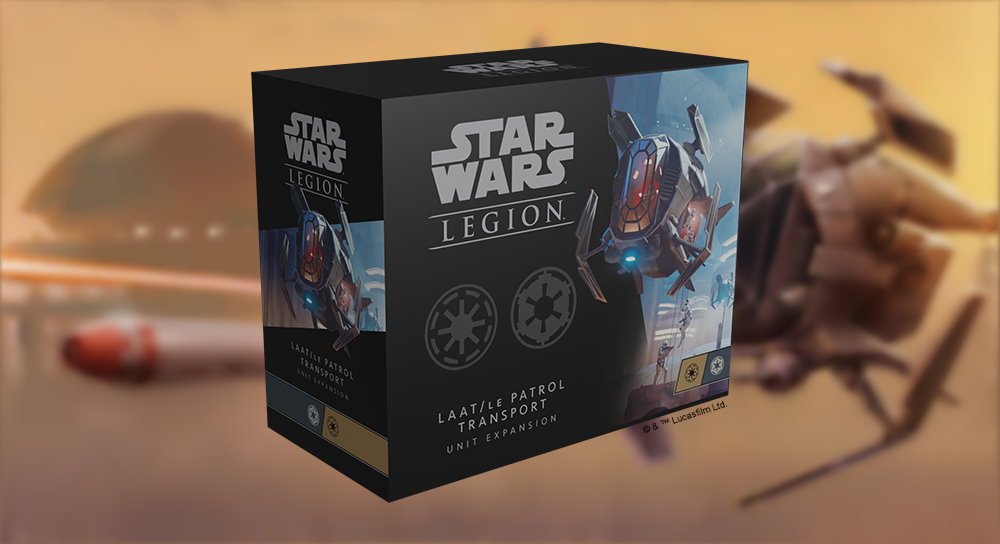 Searchlights patrol the night sky, seeking signs of the enemy amongst the shifting landscape of war.

Searchlights patrol the night sky, seeking signs of the enemy amongst the shifting landscape of war. For such a task, the LAAT/le Patrol Transport is the oft-utilized asset of the Galactic Republic, and later the forces of the Empire, when tracking down and apprehending priority targets. On the battlefield, these nimble transports are used to rapidly deploy troops where they are needed the most, regardless of impeding terrain or hostile environments. Able to soar over obstacles, the LAAT/le can quickly get your troops where they are needed most, and once there, protect their position with aerial support.

Armored transports offer new options for Republic and Imperial strategies and soon you can increase the mobility of your forces by adding the LAAT/le Patrol Transport Unit Expansion  to your tactical repertoire! This dual-faction expansion features a vehicle miniature with a fully-detailed interior and two different sets of pilot options, one in Phase II Clone armor and the other set in the uniforms of Imperial TIE pilots. The rear doors of the LAAT/le can be assembled closed or open to reveal the detail inside and a clear cockpit panel shows the interior of the craft and two pilots inside. This expansion opens up new tactical options never before available to these factions, and is sure to find a place among many player’s favorite strategies. Read on to learn more about how the LAAT/le Patrol Transport Unit Expansion might fit into your plans for an aerial assault!

An Eye In The Sky

The elevated vantage point of an aerial vehicle provides greater visibility of the battlefield to a commander. With new Field Commander options, the LAAT/le can serve as a highly mobile command center, enabling orders to be issued safely from above the conflict. This can free up valuable points when building your force as your LAAT/le can now serve as your required commander, offering a durable leadership option that can readily stay in range of your troops to issue orders. For the Galactic Republic, this option manifests in the form of Clone Commander Fox , the efficient and disciplined leader of the elite Clone Shock Troopers stationed on Coruscant. Commander Fox can help support his forces with a surge token and suppression control, a useful benefit for the Republic, who want their troopers staying in the fight with a full complement of actions every turn.

For the Galactic Empire, Governor Pryce is the new Field Commander option. A merciless Governor of the Lothal sector, Pryce is known for her uncompromising and relentless pursuit of the crew of the Ghost as seen in Star Wars™: Rebels. Her ruthless leadership can inspire her troops’ accuracy at the cost of a suppression token. Though the added suppression may seem like a drawback, and it often is, it can prove useful by providing increased cover to exposed units and is obviously less of an issue for units with a higher Courage value – which the Empire has a good selection of.

If you are looking for greater control of your transported units, the LAAT/le can further coordinate your forces by use of an Onboard Comms Channel . This handy upgrade can ensure that the transport and the unit inside can work in unison, guaranteeing the disembarkation of your troops goes as planned.

The LAAT/le utilizes its primary weaponry of twin laser cannons to attack both airborne and ground targets as it soars across the battlefield. Should you want to pivot the LAAT/le into a more active combat role, the offensive capabilities of the craft can be further bolstered by ordnance upgrades that can be combined with the main weaponry via the Arsenal 2 keyword. Previously made available to the Republic and Separatists, these ordnance options are custom-tailored to help with specific situations. For example, “Bunker Buster” Shells are great for getting enemies out of cover, High-Energy Shells are ideal for long range fire that the enemy cannot dodge, and Armor-Piercing Shells are as you would expect, great against armored targets. When combined with the twin laser cannons, these upgrades can create sizeable and specialized dice pools that are able to address any threat.

The LAAT/le Patrol Transport introduces new strategies for the Galactic Republic and Galactic Empire. The flexibility of the upgrade cards, the inclusion of a Field Commander option, and the Transport: Closed keyword on this unit can present bold new tactics that offer up a number of synergistic interactions previously unavailable to the factions. Be sure to keep an eye on Atomic Mass Games’ social media as we show off more of the exciting new options available in this expansion!

How to make a muddy road with puddles using Still Water