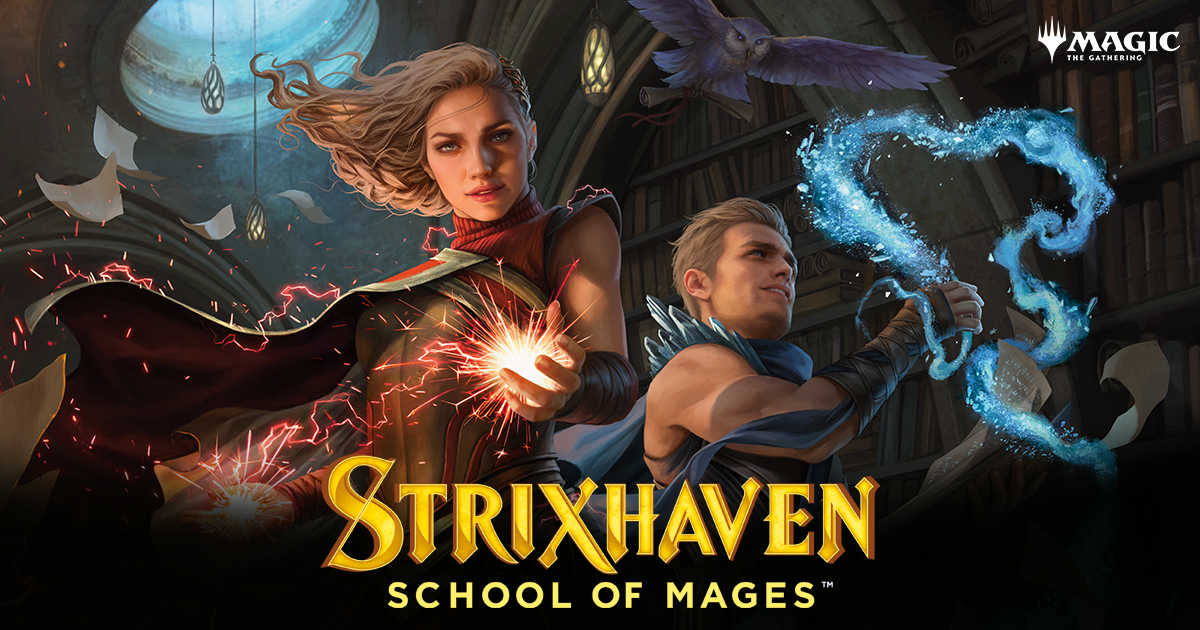 In just a few weeks, class will be in session at the prestigious Strixhaven: School of Mages, and we’re so glad you’ve chosen to begin your mystical studies with us! You represent the best and the brightest the Multiverse has to offer, and we represent all the knowledge one could possibly hope to learn as a blossoming mage practicing your mage craft.

As a new student, you’ll be joining one of our five colleges based on your aptitudes and desired areas of study. It’s important to choose a college that best fits you, and today, we’re here to help you on that journey!

So, let’s take a tour of our prestigious colleges and learn a little bit about each. Don’t worry, orientation will cover more of this in detail later in March when you arrive on campus. For now, take a look around and see what strikes your intellectual curiosity! If we have time, we may even peek at our vast library of spells from the furthest reaches of magic in our Biblioplex!

Each of our Colleges was founded by the elder dragon whose name each college bears. Our founders were paragons of magic and knowledge, and each college strives to match its founder’s vision and magical aptitudes! We won’t be meeting the founders today, but with any amount of luck, they may show up at orientation!

Take careful consideration of each college and start giving thought to which one you’ll choose!

Loreholds are diligent researchers and daring adventurers. Passionate scholars obsessed with history, they explore the past by pouring over archaeological artifacts and summoning long-dead spirits. For some students, the past is a rich tapestry worthy of disciplined study. While others wear that tapestry like a cape as they jump down into a forgotten tomb. Their motto is “Leave no stone unturned.”

Prismari are the theatre kids of Strixhaven, and magic is how they express themselves. Their spells can be spectacles of raw creativity or meticulous artistic expressions. All the world’s a stage, and whether their art is informed by mind or emotion, Prismari always leave a lasting impression. Their motto is “Express yourself with the elements.”

Quandrix mages are ingenious math magicians. They study patterns, fractals, and symmetries to command power over the fundamental forces of nature. They’ll solve a Rubik’s Cube while contemplating the metaphysical properties of the universe and can recite every number of Pi backwards. Their motto is “Math is magic.”

Silverquills wield the magic of words, from inspiring battle poetry to biting arcane insults. Stylish, intimidating, and tirelessly competitive, these mages are born leaders with a razor-sharp wit and natural charisma that can be used for good or for ill. Their motto is “Sharp style. Sharper wit.”

Witherblooms are goth bio majors. They draw power from the essence of living beings, whether that means enhancing nature or exploiting it. Witherbloom mages are most at home riding zombie crocs, picking herbs for potions, and hanging out in their swamp making grim jokes. Their motto is “Get your hands dirty.”

Whatever area of study you should choose, you will have access to our vast library of resources with spells and knowledge spanning all of magic! Some spells are certainly too dangerous and powerful even for careful mages, but at Strixhaven, we value knowledge above all else and thus have a library of historical spells to rival any other!

This collection, housed in what we call our Mystical Archive, contains a litany of spells from simple mind-spells to powerful and deadly spells most shudder to look toward. We house them in our Biblioplex and, lucky us! Professor Onyx happens to be sifting through several tomes right here with students Rowan and Will. Normally, only students get a look, but we’ll make an exception for today.

And with that, our tour of Strixhaven has ended. I’m including a map of the campus to help you get your bearings straight, and I’m also including a pamphlet, which you’ll find below, with some of the more mundane—but important—details of your time with us. We so look forward to your orientation in just a few short weeks and are excited to begin exploring the Multiverse of Magic here at Strixhaven!

For those who wish to expand their learning on Strixhaven, here are a few more details.

There will be five Commander decks, one for each college. Commander (2021 Edition) features 81 new cards. Each deck will focus on the colors and themes of its associated college!

The decks are named:

We can’t quite show you the face cards since they contain secrets about Strixhaven not quite ready for the outside world, but stay tuned! We’ll be introducing you to the leaders of these decks come orientation day!

What we can tell you is that you’ll notice some differences with the packaging for Commander decks starting with Strixhaven. As part of a larger push toward moving away from plastic packaging, Commander decks available through your local game store will use reduced plastic packaging—only the wrap around the cards themselves will be plastic (and we’re working on updating that, too!). We’ll share more as we get closer, but we’re excited to roll out this updated packaging.

There are many ways to visit Strixhaven! From Draft Boosters and Set Boosters to Bundles and more—including enjoying the benefits the college of your choice at Prerelease events—there are options aplenty to tailor your experience. We will, of course, be sharing more details closer to your orientation.

The Waterloo Campaign is now available in store! #

The control for Dune is real. #duneimperiumboardga

Did you purchase one of these 👇during our last

#joanofarcboardgame #dragon for use in #dnd in pro

#marvelcrisisprotocol is rostered for your next th

Its a game of hidden loyalties and suspicion! #unf

Into the mist... the adventurers venture into... w

#starwarslegion restock is in. Not seen in picture

WW2 action during the weekends!

Mantis Falls is a SOCIAL DEDUCTION game that works

The #urban games collection this month are our hig