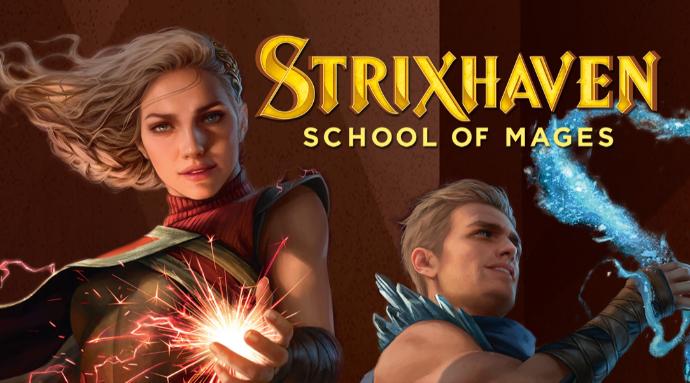 Welcome to Strixhaven: the most elite university in the Multiverse! Join one of the five colleges – Lorehold, Prismari, Quandrix, Silverquill and Witherbloom – as they vie for supremacy.

Magic: The Gathering is a game about powerful wizards matching wits against one another. And few of the game’s expansion sets deliver on that premise quite like Strixhaven: School of Mages.

Strixhaven is a new Magic set coming April 23, 2021. It will feature brand-new, Standard-legal cards, and it will be available on Magic Arena, Magic Online, and for tabletop play. Plus, there will be five new pre-built Commander decks coming with the set, as well as special premium cards available in each booster pack.

Strixhaven and Commander 2021 are both available for preorder now at Card Kingdom. In honor of this exciting new set, we’ve teamed up with some friends to give you a sense of what Strixhaven has to offer. Check out our exclusive video below, and get more info on Strixhaven after the jump.

According to Wizards of the Coast, Strixhaven is the most elite university in Magic‘s Multiverse. It’s located on the brand-new plane of Arcavios, and it’s made up of five Colleges, each aligned with an enemy color pair:

How to Paint: Imperial Stormtroopers