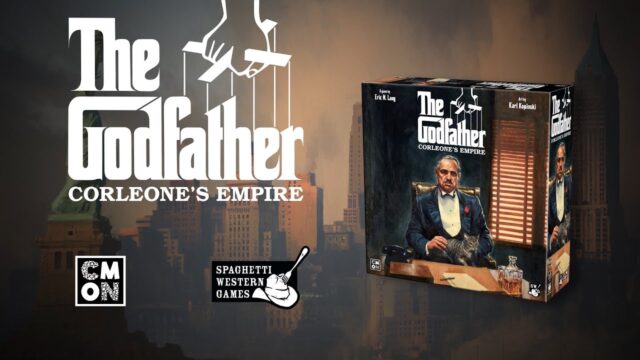 Reach the top of the cut-throat mob world…all others sleep with the fishes.

Summary:  The Godfather is played over four “acts” that are vaguely themed by the plot of the film.  But in truth, the play of the game has very little to do with the events depicted in the movie.  Instead, let’s say that the action is “inspired” by the kind of things that the characters might have done while they were off screen.

Each act begins by opening a new business for the players—leaders of New York City gangs—to “shake down” for fun and profit.  Then the players take turns placing their characters—family members or thugs—on various locations in the city.  This is classic worker-placement stuff:  You gain goodies based on the location you plop your worker down on.  It’s what you do with the stuff that’s interesting:  Instead of placing a worker, a player can complete a “job” for Don Corleone by paying the required mix of booze, guns, and blood money.  Jobs pay out money and grant a one-use power, up to the ever-popular “gunning down” of a rival gang member who then must “swim with the fishes” in the Hudson River for the rest of the act.  The goal of all this money-making is to secret your funds in your suitcase, as only money here counts at the end of the game.

The act closes with a struggle for control of the seven “turfs” in the city, using an area control mechanism where the player who deployed the most workers in a turf gets control, earning privileges as long as they can keep it and possibly cash at the end of the game.  Then allies can be bought in auction using money from the suitcases.

The Godfather: Corleone’s Empire meets the hype. It’s not overly complicated, but beautifully illustrates its theme through gameplay and all the stories friends will share afterward. The miniatures are well scuplted for a board game. You can take the time to paint each figure (the count is not high compared to other CMON “miniatures heavy” board games) for more immersive gameplay.

How to create rust effects