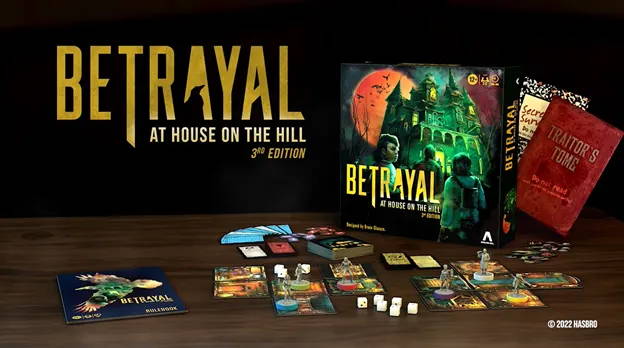 Announcing Betrayal at House on the Hill 3rd Edition game, due to be released the second half of 2022.

Betrayal at House on the Hill was first published back in 2004 and quickly became a fan-favorite. In 2005, it was recognized with a Gamer’s Choice Award at the Origins Game Fair. A second edition and spin-off versions were released over the following years, but the core Betrayal at House on the Hill experience remained unchanged. Now, 18 years after its initial launch, we at Avalon Hill felt it was time for this classic game of treachery and terror to be re-introduced to board gaming fans old and new!

The first thing fans of Betrayal at House on the Hill may notice is the updated art from the previous edition.

In addition to the amazing art are six original, highly-detailed miniatures that represent the twelve unique and diverse characters tempted to enter the house. Unlike the second edition, these miniatures come unpainted so that you can break out your own personal brushes and paints to detail the minis how you wish.

We’ve also moved away from the Haunt matrix that determined how the game would twist and change when the Haunt was rolled. Instead, players now choose a Scenario card that reflects why their characters have come to the house. When the Haunt is rolled, players will compare the Omen drawn to a chart on the back of the Scenario card to determine which Haunt will be played.

Many other changes have been made, including 50 unique and original haunts, house features with modern touches (such as spotty cell service… the horror!), a Reluctant Traitor rule, and numerous items, omens, and events original to this version of the Betrayal at House on the Hill game.

We’re excited for this third edition and over the coming weeks we plan to dive into the updated features mentioned.