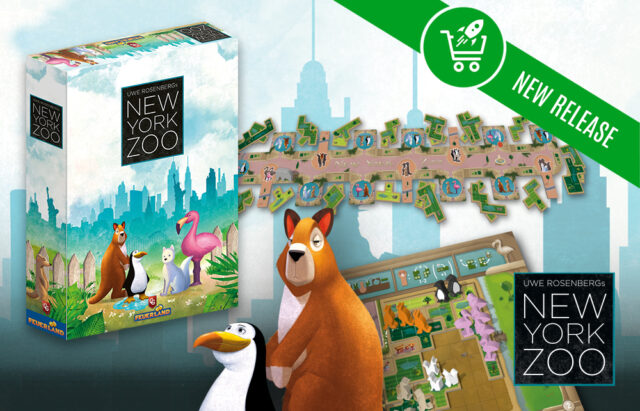 In New York Zoo, you are constructing an animal park. Build animal enclosures, introduce new animals and raise their offspring. The game play is straight forward as you have only two turn options: Puzzle a new enclosure tile into your zoo area or gain new animals to populate your animal encounters. But be sure to time your actions well since you want your zoo to participate in as many animal breedings as possible.

Gameplay is straightforward as you have only two options on your turn: build a new enclosure in your zoo, or populate your zoo with more animals. But be sure to time your actions well since you want your zoo to participate in as many animal breedings as possible.

On a turn, players must choose between taking tiles from the rondel and adding two animals to their zoo. The objective of this game is to complete their entire board with regular and bonus tiles before anyone else does. Bonus tiles are attractions which range from an eight tile piece to a single tile piece to complete any ‘leftover’ empty tile spaces.

The tiles are scattered around the central piece in stacks, randomly distributed but with the largest pieces on top of each stack. That central piece also has pairs of the game’s five animals—flamingos, penguins, arctic foxes, meerkats, and kangaroos—in fixed spots. On a turn, each player moves the elephant token a number of spaces of their choice (with the maximum depending on the player count) on to either one of those fixed spaces showing two animals or on to a stack of tiles. If the former, the player adds those two animals to their zoo, either directly on to enclosure tiles they’ve already placed or on to the temporary houses on their board, which serve as way stations if you don’t have room for that animal type. If they land on a space with the stack of tiles, the player takes the topmost tile and adds it anywhere to their board, so long as they have an animal in their houses to place on the new tile.

New York Zoo plays up to five players with a slight modifications to the rules for two and three players. If you enjoy games like Cloud City, Kingdomino, or Barenpark, New York Zoo will probably be right up your alley.

The Commonwealth Answers the Call