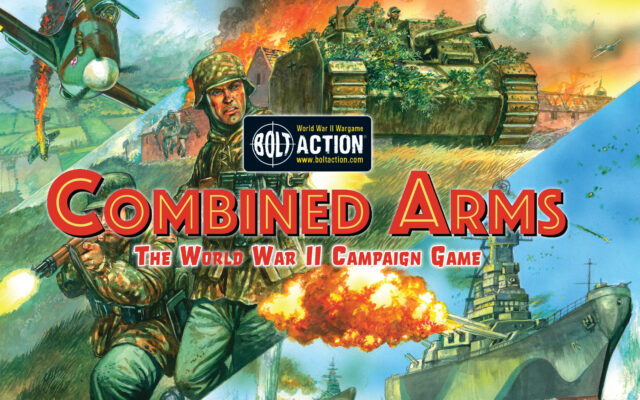 Bolt Action – Combined Arms is a strategic board game that commands the players to face off, seize the initiative and outwit their foe amidst the fog of war. Each game will see you fighting for control of air, land, and sea in order to claim objectives and hold them against the enemy.

Combined Arms includes finely detailed plastic miniatures featuring five different objectives as well as unit markers that represent Army (Infantry and Armour), Naval, and Aircraft units (brown for Allies, green for Axis) as well as Blitz markers to represent fast moving units. The objectives also come in brown and green to represent captured objectives, with grey objectives representing those yet to be captured.

Players will manoeuvre their infantry units, naval units, armoured units and air units by alternately issuing orders during the Orders phase. Invariably their goal will be to control the five objectives; ownership of all five guarantees victory – though this is not the only means. Should either player accrue enough victory points through other means before either controls all the objectives, they will claim victory. Objectives may be as simple as being worth victory points (Cultural Centre) or may confer other campaign bonuses – such as a radar station allowing you to react out of sequence to an opponent’s air order.

At the end of each turn, the resolution deck comes into play. A card is flipped, and dependent on its specific effects, this is where players will instigate battles, capture objectives, reinforce by returning defeated units or escalate by recruiting new units. It is also through these cards that players can achieve victory points.

Players can also use initiative cards from hand to influence the campaign.

Four maps are included to test your mettle and strategic command of land, air and sea. Each theatre has its own challenges and opportunities, some rewarding control over the sea, some rewarding control over the skies. How many of your precious resources will you sink into each, and how much will be left to control the land? Will you rely on stealth as you move units secretly, springing up where you are least suspected, or will you attempt to overwhelm your enemy with brutal overkill?

Northwest Europe – Encompassing southern England and northern France, with this map players can attempt the Allied invasion of western Europe, or defend Festung Europa and throw the Allies back into the sea!

The Eastern Front – The harsh and unforgiving Eastern Front is represented by the Crimean Peninsula, the Black Sea, and surrounding areas. Will the Axis take Sevastapol on their way to seize the oilfields of the Caucasus, or will the brave sons and daughters of the Motherland drive the invaders back to their home soil?

North Africa – Take command of the Afrika Korps and their Italian allies, or rally the British 8th Army and the ships of the Royal Nav to defend the Allies vital transport routes in the Mediterranean. Send in your troops to seize or defend vital targets like Crete and El Alamein.

The Pacific – The Japanese Empire marches remorselessly across south-east Asia and the island chains of the Pacific. Can the combined might of the US Navy and the British Commonwealth forces check the Japanese advance at Guadalcanal?

Whilst Combined Arms can be played and enjoyed as a stand-alone game, it is intended to allow players to incorporate Bolt Action, Blood Red Skies, Cruel Seas, or Victory at Sea for an epic continent-spanning wargaming campaign. The system is modular, simply requiring that you sub out certain Initiative cards from the game for those that pertain to your chosen game systems. These unique cards link your campaign inextricably with your wargames, meaning your choices in the campaign could mean victory or defeat on the tabletop.

Simply put, your campaign tokens each represent a land, sea, or air force of a certain points value, and rather than simply using dice to resolve battles on the campaign map, you will play a game of Bolt Action, Blood Red Skies, Victory at Sea or Cruel Seas to determine the result.

NOW AVAILABLE IN STORE and ONLINE

FROM VISUALIZATION TO THE TABLETOP