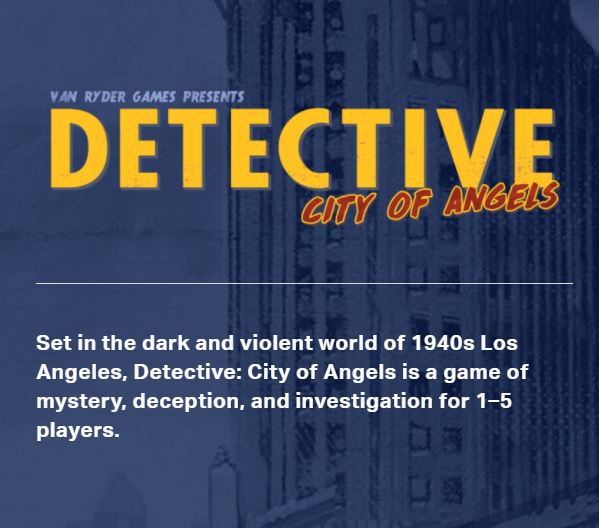 Do whatever it takes to close the case in a dark and violent 1940’s Los Angeles.

Detective: City of Angels,is a game of mystery, deception, and investigation for 1–5 players. Most players will step into the shoes of LAPD homicide detectives, hungry for glory and willing to do whatever it takes to successfully close a case, even if that means intimidating suspects, concealing evidence, and hiring snitches to rat on their fellow detectives. One player, however, will take on the role of The Chisel, whose only goal is to stall and misdirect the detectives at every turn using bluffing, manipulation, and (often) outright lies.

Detective: CoA uses the innovative ARC (Adaptive Response Card) System to create the feel of interrogating a suspect. Suspects do not simply give paragraph-book responses; instead The Chisel carefully chooses how they will answer.

When Billy O’Shea insists that the victim was a regular at Topsy’s Nightclub, is he telling the truth or is The Chisel subtly leading the detectives toward a dead end that will cost them precious time? Detectives can challenge responses that they think are lies but at great risk: If they’re wrong, The Chisel will acquire leverage over them, making the case that much harder to solve.

Detective: CoA includes separate, detailed casebooks for both the detectives and The Chisel. Each crime is a carefully constructed puzzle that can unfold in a variety of ways depending on how the detectives choose to pursue their investigations. As the detectives turn the city upside down, uncovering fresh evidence and “hot” leads, hidden suspects may be revealed and new lines of questioning will open up, creating a rich, story-driven experience.

Inspired by classic film noir like The Big Sleep, the works of James Ellroy (L.A. Confidential), and the video game L.A. Noire from Rockstar Games, Detective: City of Angels is a murder-mystery game unlike any other. Will one detective rise above the rest and close the case on L.A.’s latest high profile murder? Or will The Chisel sow enough doubt and confusion to prevent the detectives from solving the crime?

—description from the publisher

A “sleuth” mode allows 1 or more players to play fully cooperatively, solving the cases together.

Because the cases are mysteries with a solution the cases are only able to be played one time as a Detective. This is because once you know what happened you would not be able to play it again unless you completely forgot everything. So for the 1-4 players that play a case as the Detective, the case is not replayable (unless you play as the Chisel in future plays, see below).

Now The Chisel is the player that plays controlling the suspects and the unseen forces of the city in 1940’s L.A. He or she knows the case and so can very well run the same case again for different players (almost like a game master, but one that can actively try to stop the detectives from solving the case). So from that stand point, the cases are replayable.

In detective, you are actually solving a mystery as opposed to using deduction to figure it out. Cases do not vary with a different solution each time. The Chisel player varies the experience so being one and playing with a different group essentially turns the game from a mystery to a Chisel Vs Detective and preventing the detectives from winning and figuring out the solution.

Multiple cases will come with the game and there are additional content post release. Overall, it is amazing and very thematic.