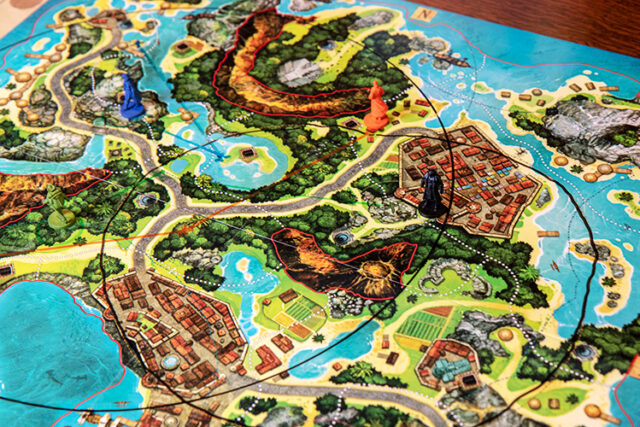 Treasure Island is a game of bluffing and adventure in which one player embodies Long John, trying to mislead the others in their search for his treasure. The hunt reaches its climax with Long John’s escape, when he will make a final run to get the booty for himself!

Long John Silver’s crew has committed mutiny and has him cornered and tied up! Round after round, they question him about the location of his treasure and explore the island following his directions — or perhaps his misdirections? Who knows… The old sea dog is surely planning an escape, after all, after which he will definitely try to get his treasure back.

Every few turns, Silver is forced to give up a clue to the location by playing a hint card, most of which rule out certain sections of the map. These hints are public knowledge but the other pirates can also extract private information from Silver using special actions. Only one pirate can find the treasure, so information is jealously guarded. Also, Silver can sometimes lie (he is a pirate, after all) so not everything can be trusted.

Eventually Silver escapes and joins the other pirates in a race to the burial site with the huge advantage that he knows exactly where it is. It gets quite chaotic.

Get your copy Treasure Island HERE!