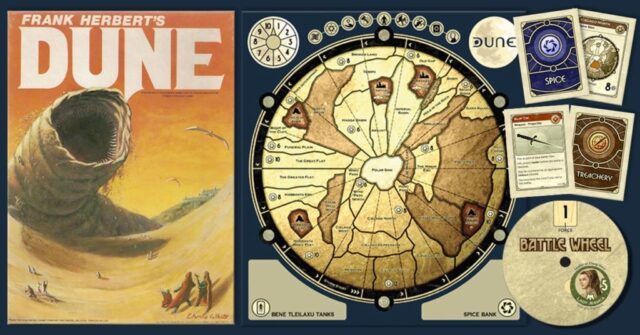 Wildly different factions vie for control of a planet through alliance and treachery.

Imagine you can control the forces of a noble family, guild, or religious order on a barren planet which is the only source for the most valuable substance in the known universe.

Imagine you can rewrite the script for one of the most famous science fiction books of all time. Welcome to the acclaimed 40-year-old board game which allows you to recreate the incredible world of Frank Herbert’s DUNE.

In DUNE you will become the leader of one of six great factions. Each wishes to control the most valuable resource in the universe – melange, the mysterious spice only found at great cost on the planet DUNE. As Duke Leto Atreides says “All fades before melange. A handful of spice will buy a home on Tupile. It cannot be manufactured, it must be mined on Arrakis. It is unique and it has true geriatric properties.” And without melange space travel would be impossible. Only by ingesting the addictive drug can the Guild Steersman continue to experience visions of the future, enabling them to plot a safe path through hyperspace.

Who will control DUNE? Become one of the characters and their forces from the book and . . . You decide!

While its DUNE season with the movie showing in theaters near you, this isn’t a new game. It’s actually a reprint of a classic, dating all the way back to 1979.

The game begins with SIX playable sides. While all the phases in the game are common to all, each of the factions have varying advantages during the different phases.

We’ve got Houses Harkonnen and Atreides, the native Fremen, the Emperor’s personal forces, the Spice Guild and the Bene Gesserit battling it out for victory, and as anyone who has read the books/seen the movie knows, some of those are barely factions at all. Which Dune is aware of, because aside from the fact everyone has armies they can deploy onto the surface of Arrakis, and everyone gets money for harvesting spice, the approaches to play and to winning are so varied that each side may as well be playing a different game.

The basic aim of Dune is to use your troops to run/fly around Arrakis harvesting spice, battling anyone who gets in your way while sandstorms and giant worms threaten to swallow entire armies at any given moment. The game is won during the Mentat Phase (Victory condition check phase) by seizing or controling 3 strongholds (4 if in an alliance).

Normal victory can be achieved by capturing strongholds, but that’s not the only way you can win. Some factions has their own unique victory condition. The Fremen can win if nobody control certain strongholds, for example, while the Bene Gesserit have an insane trick where the player is allowed early in the game to predict which other player is going to win, and in what turn (games are capped at 10 turns). If the Bene Gesserit player gets that right, then they win, beating the person who actually won.

While all that is intriguing, it makes sense if you’ve read DUNE or at least watch it on the tube. And all that makes the intrigue, politics and battles intense… edge of the seat kind of intense.

” ok… here we go… i think it will use Gurney Halleck as the hero for this battle. This is really important… i need them spice. Hmm.. how many forces do i commit… still need to pay for them to be in battle… WAIT WAIT… WHAT IF the traitor card they are holding is Gurney… OMG this is crazy! HOLD ON… i could be certain they got the LASGUN and a SHIELD during the last rounds of Treachery Bidding… ARGHHH”

From the game last night 2021 before the Covid Lockdown

Dune encourages the creation of formal alliances… and what we mean by formal is… Alliance can only be formed or break during the Nexus phase with the guest appearence of the Shai Hulud sandwords. Allies can not only help each other out by lending some of their unique faction powers, but you can share in victory conditions, so if one of the alliance member’s two unique criteria are met, then both win. And it’s only when you form an alliance that you unlock a real sense of power when you realize the combos and synergies that can happen between the 2 factions.

And thereafter, you will be looking forward to the next game. To form new alliance and find out the “weirding ways” of new combos that can be exploited to victory.

Dune is a game where strategy is key, but that’s often not enough. The game’s most important events, like the distribution of spice or the location of army-destroying storms, take place almost entirely at random. It’s immensely cruel to see your best-laid plans destroyed by a random card draw, even more so to watch a whole game pass you by because spice never bothered spawning anywhere near your troops.

The orginal game that came out decades ago actually has 8 factions. This time round, the 2 remaining funky faction comes in an expansion which will further explode your mind in ways you can’t fathom. Remember the traitor card(s) everyone has in thier hand… well i present to you… The Facedancers from the Tleilaxu faction who are the masters of genetic manuplation. If you think the traitor cards are bad ( its an auto win for the traitor card holder)… the facedancers goes a step further to reveal themselves as actually taking over that space which was won. So….

” Wait… so you won the battle?? Sorry… Facedancers. I WON… BOTH of you lose…”

The expansion adds two new factions, the Ixians and the Tleilaxu, to the Dune boardgame.

Tleilaxu: Led by a small council of Tleilaxu Masters – the fanatic, xenophobic Tleilaxu were tolerated because of their useful genetic engineering superiority. Although underestimated and loathed by others, they hoped to someday dominate all.

Ixian: The cyborg, Prince Rhombur of House Vernius, leads the Ixians, masters of manufacturing and technologies only they know how to deploy.

Now we really…REALLY recommend you getting the deluxe mat if you already have the game. Scaled up 135% for maximum visibility, the Dune Game mat is accompanied by Sandworm, Storm & Family Atomics special edition miniatures. You will need this to easily scan through sectors and position troops within them. Especially on those where its clustered with opposing troops.

Learn how to play INFINITY