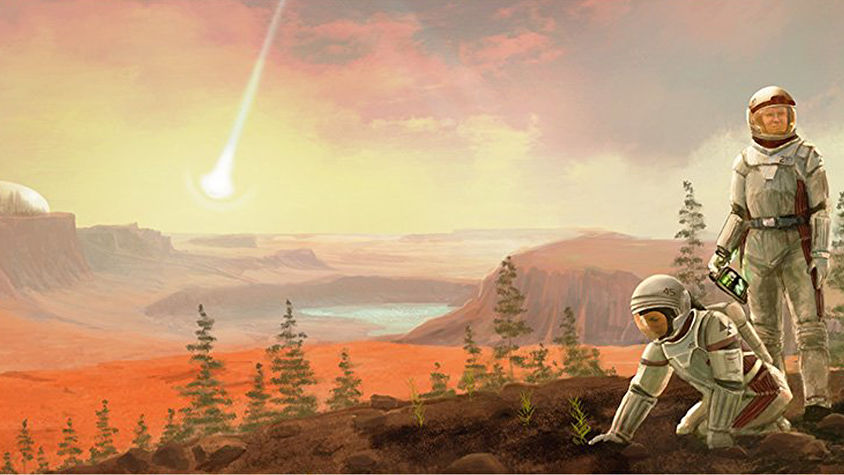 A new series of books based on the hit strategy board game , Terraforming Mars, is being developed by the same publisher behind the Keyforge and Pandemic novels, Aconyte Books.

Set in the far future of 2400, Terraforming Mars sees humanity landing on the Red Planet and attempting to make it a habitable place for people to settle down. Struggling to improve the harsh conditions of the planet and scuffling with rival corporations also looking to profit from human expansion, Terraforming Mars presents a world filled with potential conflict. Resources can be plentiful depending on how well you play out your “assigned” Corporation Player card. Much like the conflict in NETRUNNER (WOTC) minus the mega corps, Terraforming Mars instead features a whole slew of small corporations from different industries.

Aconyte Books will translate this conflict into a series of novels inspired by the setting of Terraforming Mars, with the books looking to tap into the game’s underlying spirit of “optimism and scientific progress”. Partnering with FryxGames – the publisher behind Terraforming Mars – Aconyte is planning to draw on the science-fiction aspects of the tabletop title to provide a “much needed escape to a different world”.

Terraforming Mars is a board game for one to five players that sees players competing as rival corporations hoping to turn the inhospitable world into a paradise for humanity. Despite the fact that players are fighting for victory points by reaching various milestones and gaining awards, Terraforming Mars is also a semi-not-so-co-op game in that all players must collectively help with the terraforming process. Embarking on new projects, players can invest their resources so that they can generate more resources efficiently and more often than not… that leads to an increase in Terraforming rating (and victory points). The better a player’s terraforming rating, the more resources they’ll receive at the end of each round. Its a multi-economy synergy engine building game. There are many ways and angles to win the game.

Once all three global parameters have been met – temperature, oxygen and ocean – whichever player has the most victory points from completing milestones, earning awards and cultivating a good terraforming rating is named the winner.

Terraforming Mars was created by Jacob Fryxelius, with artwork from Isaac Fryxelius, who co-founded FryxGames along with his brothers in 2011.

Aconyte Books is a division of tabletop giant Asmodee – owner of board game studios including Fantasy Flight Games, Catan Studio and Z-Man Games – previously announced to be handling novel adaptations of series such as Twilight Imperium, Pandemic, Keyforge, the Arkham Horror Files universe and Descent: Journeys in the Dark. The Amazon listing for Descent book Shield of Daqan resulted in the next entry in the dungeon-crawler series being leaked earlier this year, before being confirmed recently as Descent: Legends of the Dark.

The first Terraforming Mars book is set to be released next summer. Aconyte has also confirmed that additional books based on the board game are on the way.

How to paint Xenomorphs with Sprue Gate