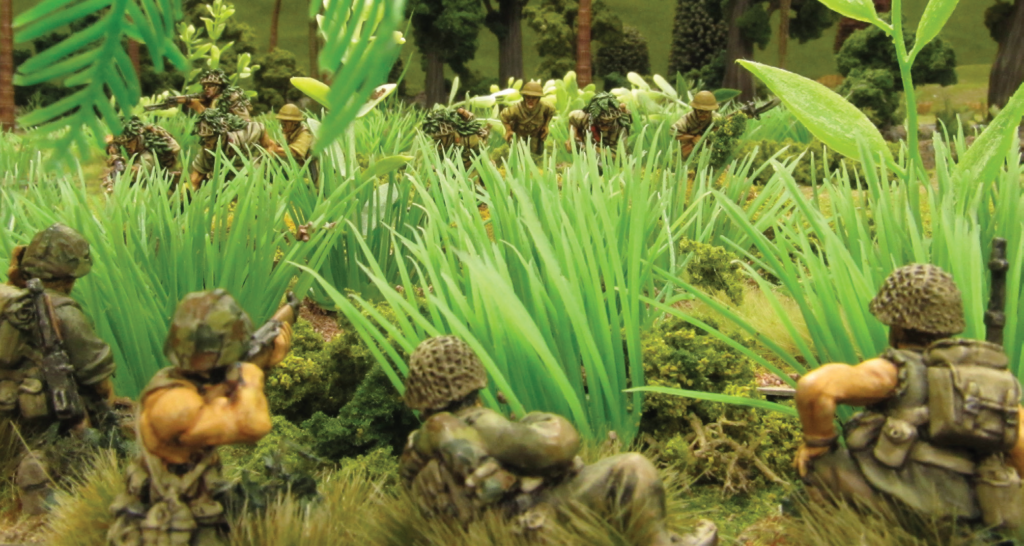 The battles of World War Two ravaged the entire world. Where the Band of Brothers starter set is very much concerned with the European Theatre in the wake of D-Day, the brand new starter set shifts focus to the Pacific, pitting the United States Marine Corps against Japanese Island defenders in some of the most brutal and hard-fought battles of the War.

The US Pacific fleet was all but annihilated in the surprise attack on Pearl Harbour, which drew the Americans directly into World War II. The British fleet in South East Asia was similarly crippled. By mid-1942, the Japanese Imperial Army had conquered all of the Dutch East Indies, the British territories of Malaya and Burma, stopping at the very border with India, the US colony of the Philippines as well as the many chains of islands of the Pacific, including most of New Guinea, from which they had proceeded to bomb northern Australia. During these campaigns, the Japanese had inflicted on the British and Americans some of the worst defeats in their military history. And all of this while still maintaining their pressure against the Chinese. The Soviets, not very keen to open another front while desperately defending their homeland against the German invasion, kept their neutrality agreement with the Japanese.

The immense industrial might that America brought to bear, converting her massive economy to war production. Soon the Americans started sending wave after wave of new ships and fighting men against the Japanese outer territories, beginning with the Solomon Islands, where the US Marines for the first time inflicted a sound defeat upon the Japanese at the battle of Guadalcanal.

Eventually, the Japanese Navy, which for a while could arguably claim to be the best in the world, suffered decisive defeats at the battles of the Coral Sea and Midway, and later at Leyte Gulf, when the Japanese effectively lost control of the Pacific once and for all. The US started an ‘island-hopping’ campaign of amphibious invasions against key Japanese bases, choosing to bypass and isolate others. The Marines learned many a bloody lesson in the fighting against the stubborn Japanese soldiers, honing their waterborne assault tactics in the invasion of island after island – Tarawa, Saipan, Philippines, Iwo Jima, Okinawa.

The new starter set is focussed on the island hopping campaigns enacted by the US to reclaim Japanese advances. Unlike the land war that raged in Europe, North Africa, and the Soviet Union, where vast armies of tanks and infantry could manoeuvre and fight over large tracts of open ground, the Pacific campaign was fought mostly on a series of relatively small islands, densely packed with jungles and protected by the sea. Each island had to be landed on, fought for, and the defenders rooted out of, individually.

Containing two opposing forces set amongst the many islands in the Pacific theatre, Island Assault! contains the Bolt Action 2nd edition rules as well as a scenario booklet guiding you through your first steps in the game. Before long you’ll be adding to your new army and wreaking havoc on your foes be they fighting for Uncle Sam or the Emperor!

We’ll also be introducing four new box sets, two each for the USMC and Japanese, to expand upon the contents of the core set. Indeed, adding just a support box to the forces found within Island Assault will form the nucleus of a core force.

Such is the nature of these Bolt Action that you can then build the type of army you want to play on the table; that can be representative of any of the actions fought by the US Marines or the Imperial Japanese across the course of the Pacific Theatre.