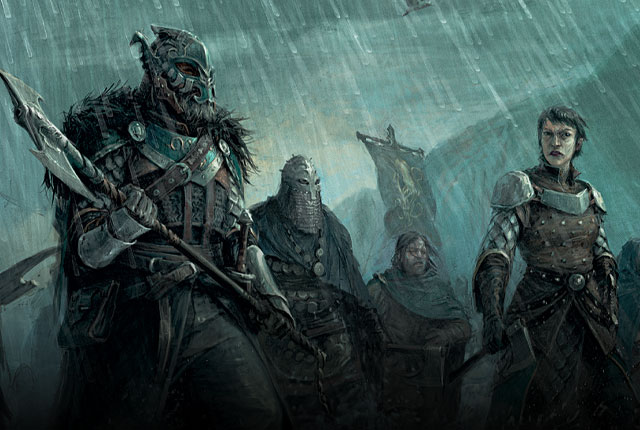 “A lion may be fierce enough on land, but at sea the kraken rules supreme.” – Victarion Greyjoy

When fielding a Greyjoy army, players can expect themes of raw combat potential… Assuming you keep up the offense! While devastating if they get in the first strikes and keep their battlefield momentum going, if Greyjoys begin to fall behind in the killing game their strategies will begin to crumble-Hitting hard, before your opponent has a chance to react, is a key strategy for the Greyjoys.

To represent their drive for raw power, House Greyjoy implements a unique mechanic across many of their units and Tactics Cards known as Pillage. When they begin to destroy their foes, units will gain Pillage Tokens. These tokens are used across each unit to gain powerful and unique benefits, ranging from additional modifiers to Hit, enhanced defense, or supplementing unique Abilities. Of course, these tokens are only won via destruction of enemy ranks (or, in rare cases, clever use of Tactics Cards), so being passive is not an option for the followers of the Kraken!

Another central theme to House Greyjoy is restoration. While lacking in both Defense as well as Morale (at least compared to the more stalwart and“knightly” houses of Westeros) the Greyjoys bring a fierce grit and lust for wealth and spoils to the battlefield. It is through this that they also bring a plethora of restoration capabilities to the fight. Of course, being the raiders they are, these mechanics are also directly tied to their offense-but this means that, should your plans falter and your units begin to crumble, you’ll have access to several options to bring their numbers back into the fight, returning their offensive potential!

How to paint Xenomorphs with Sprue Gate